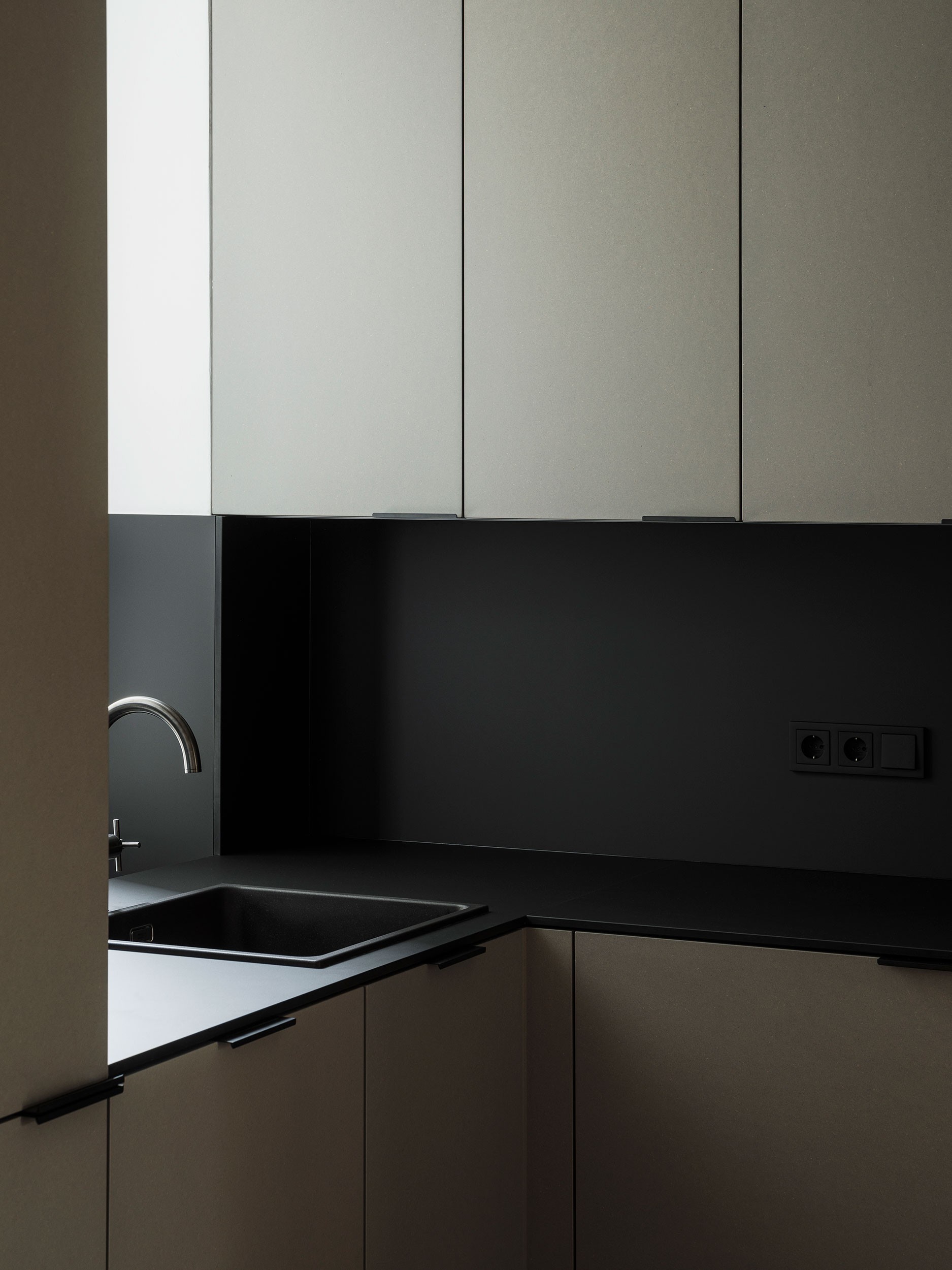 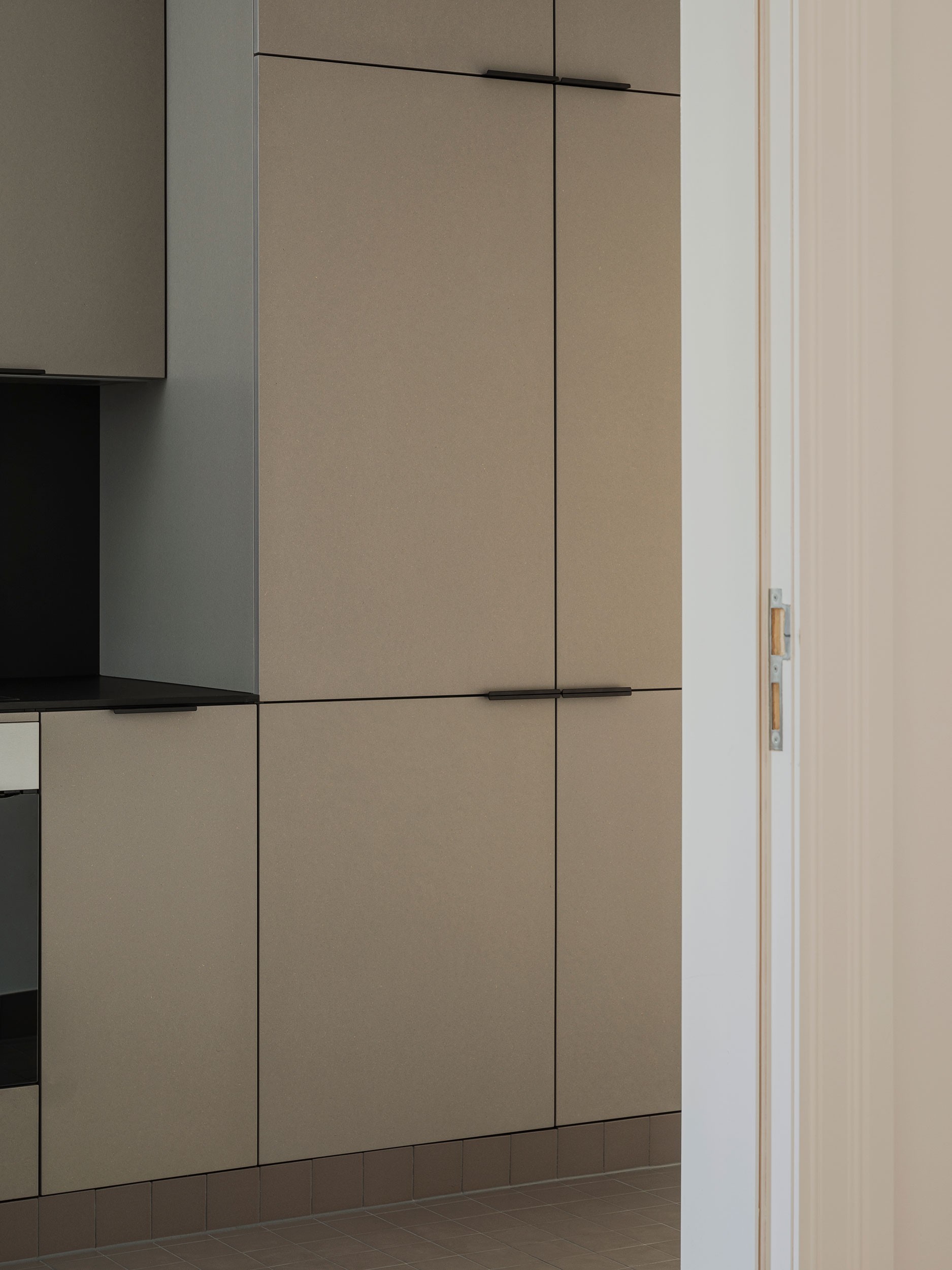 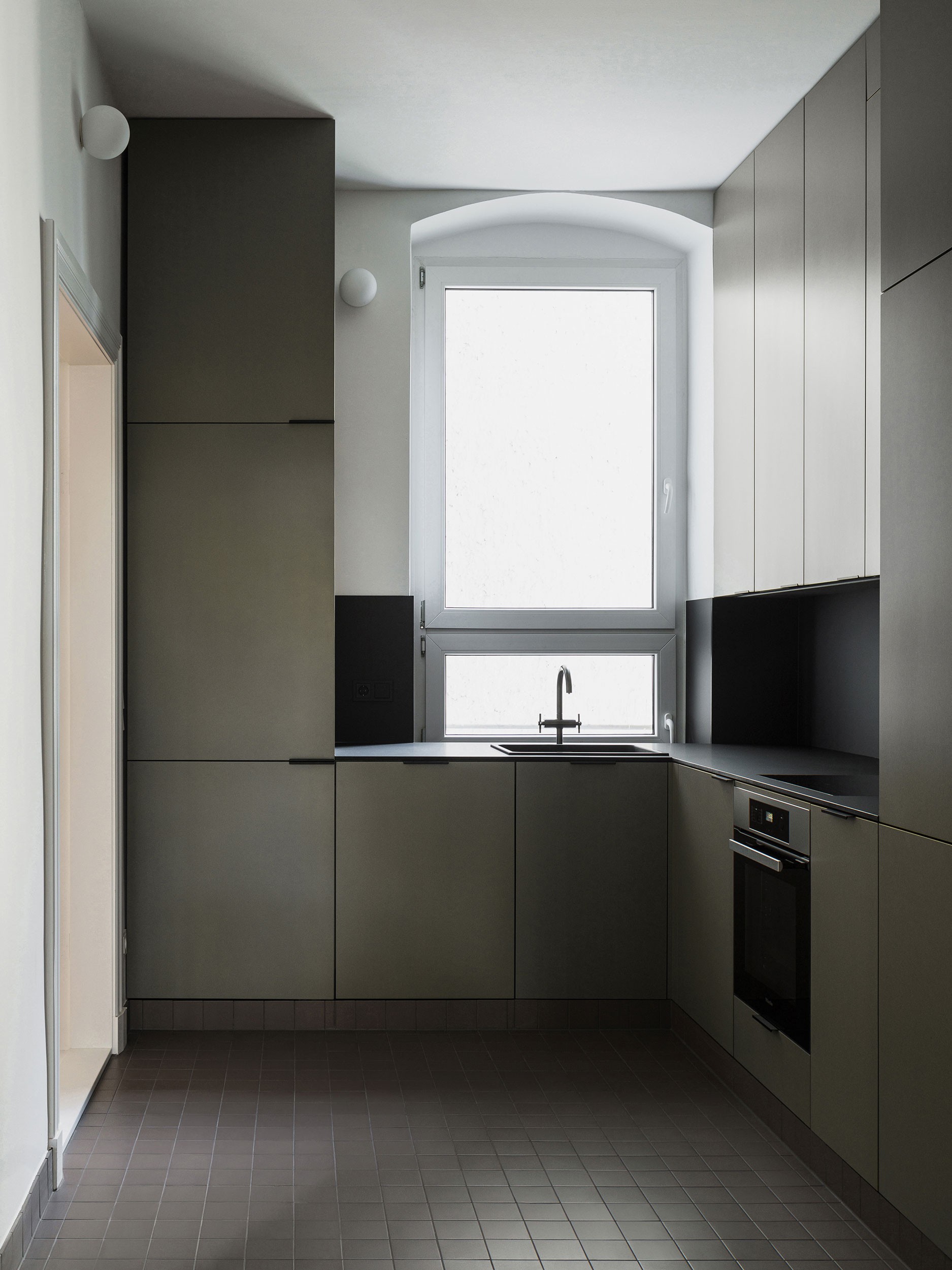 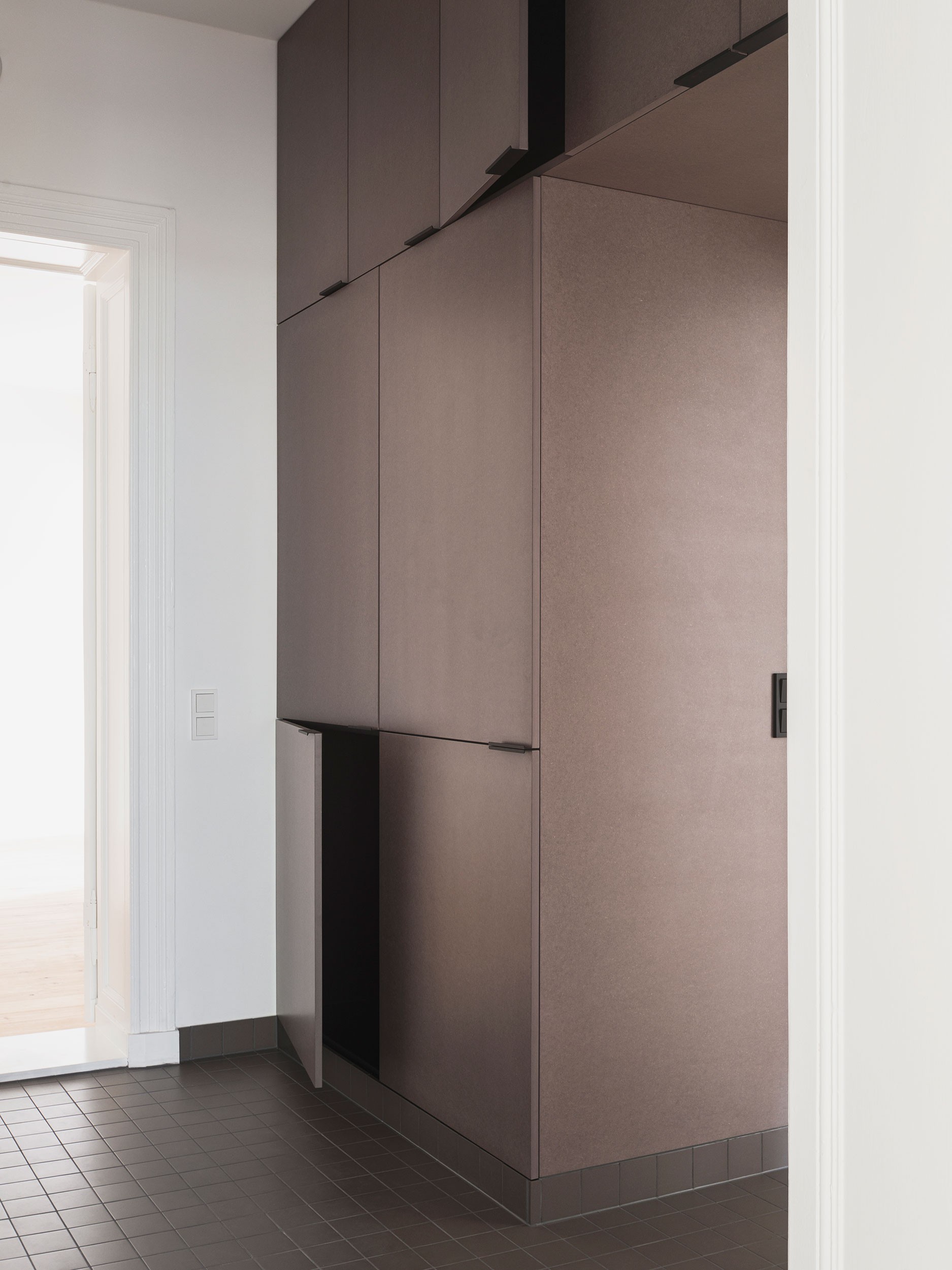 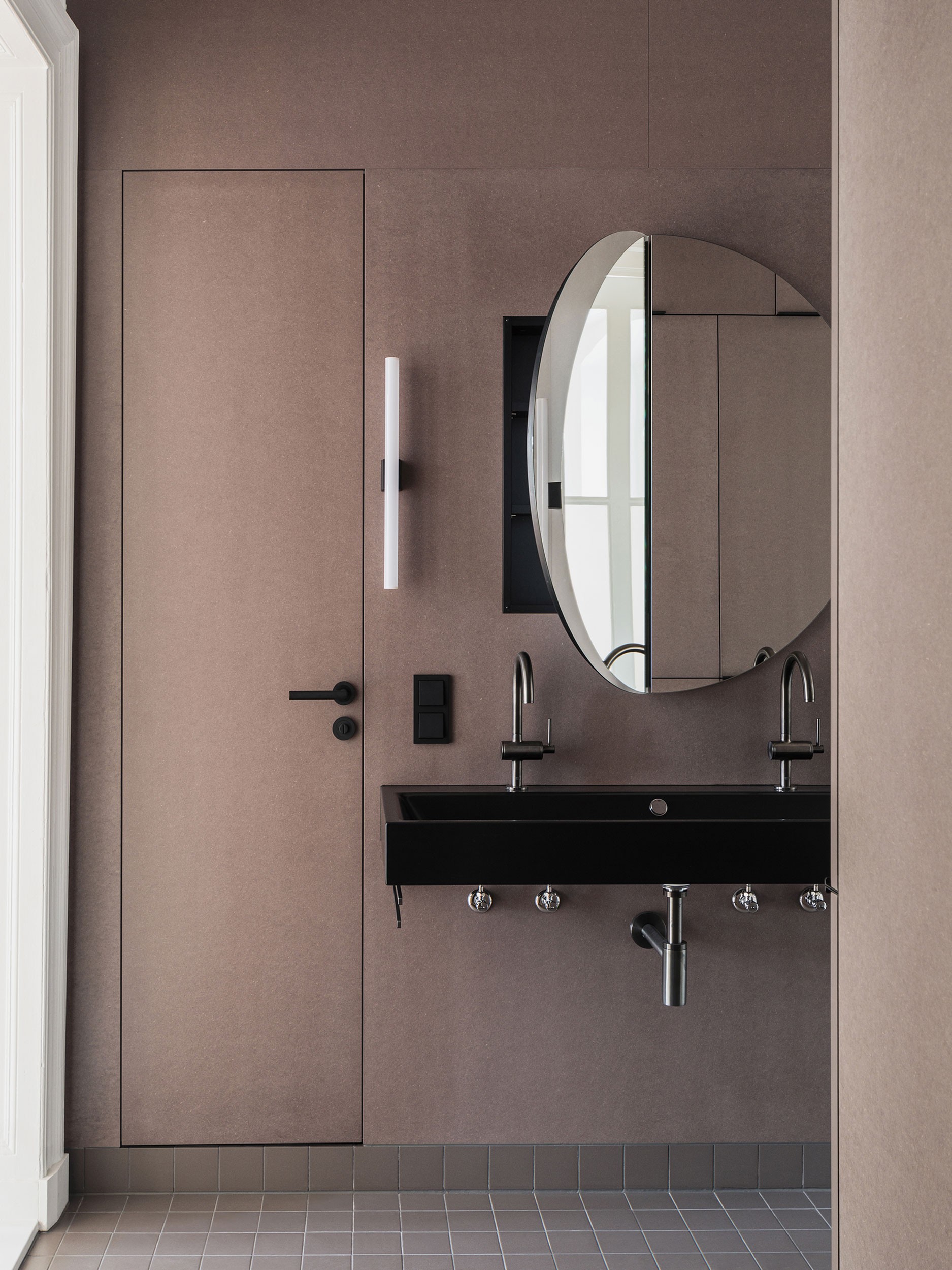 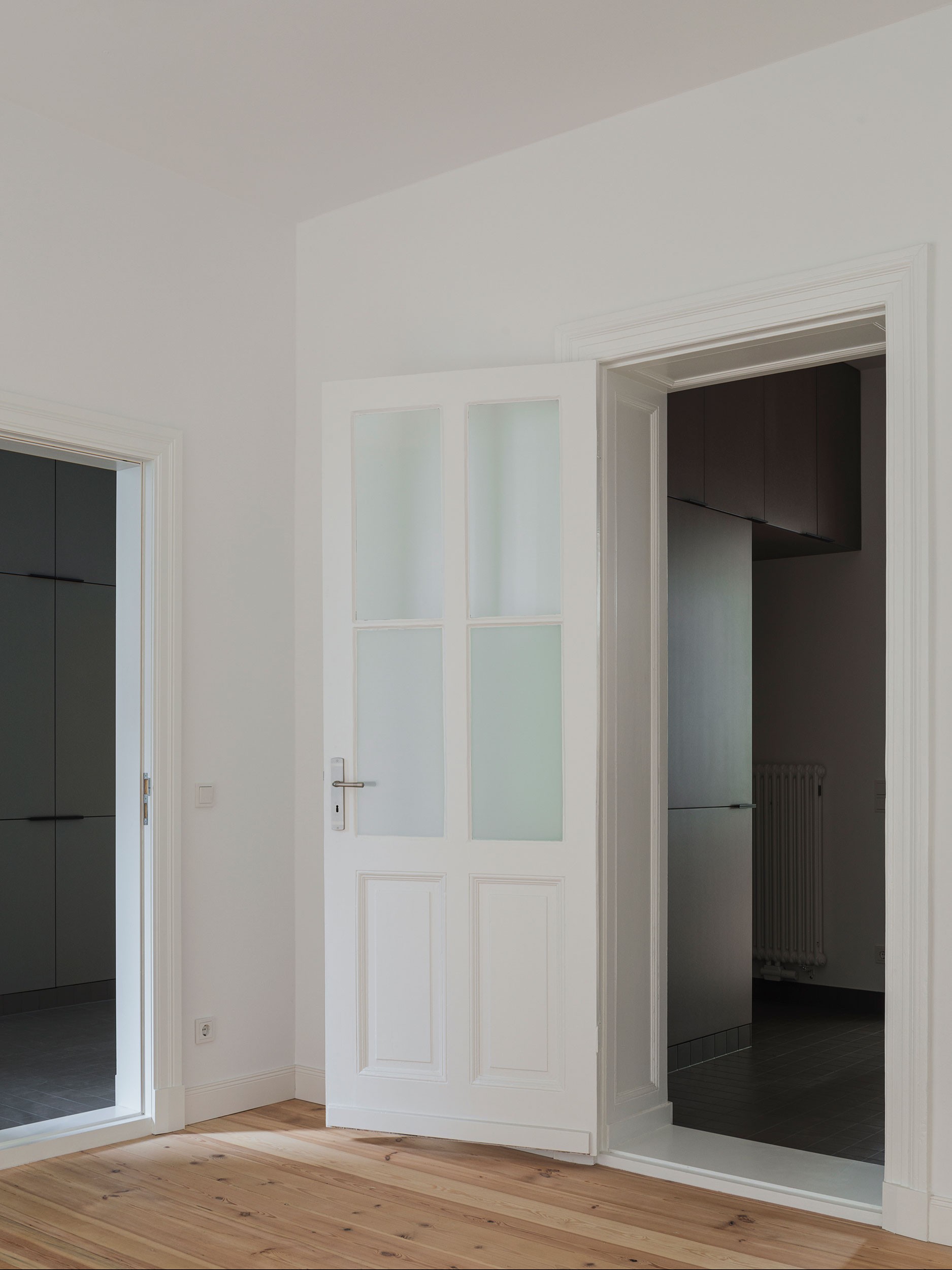 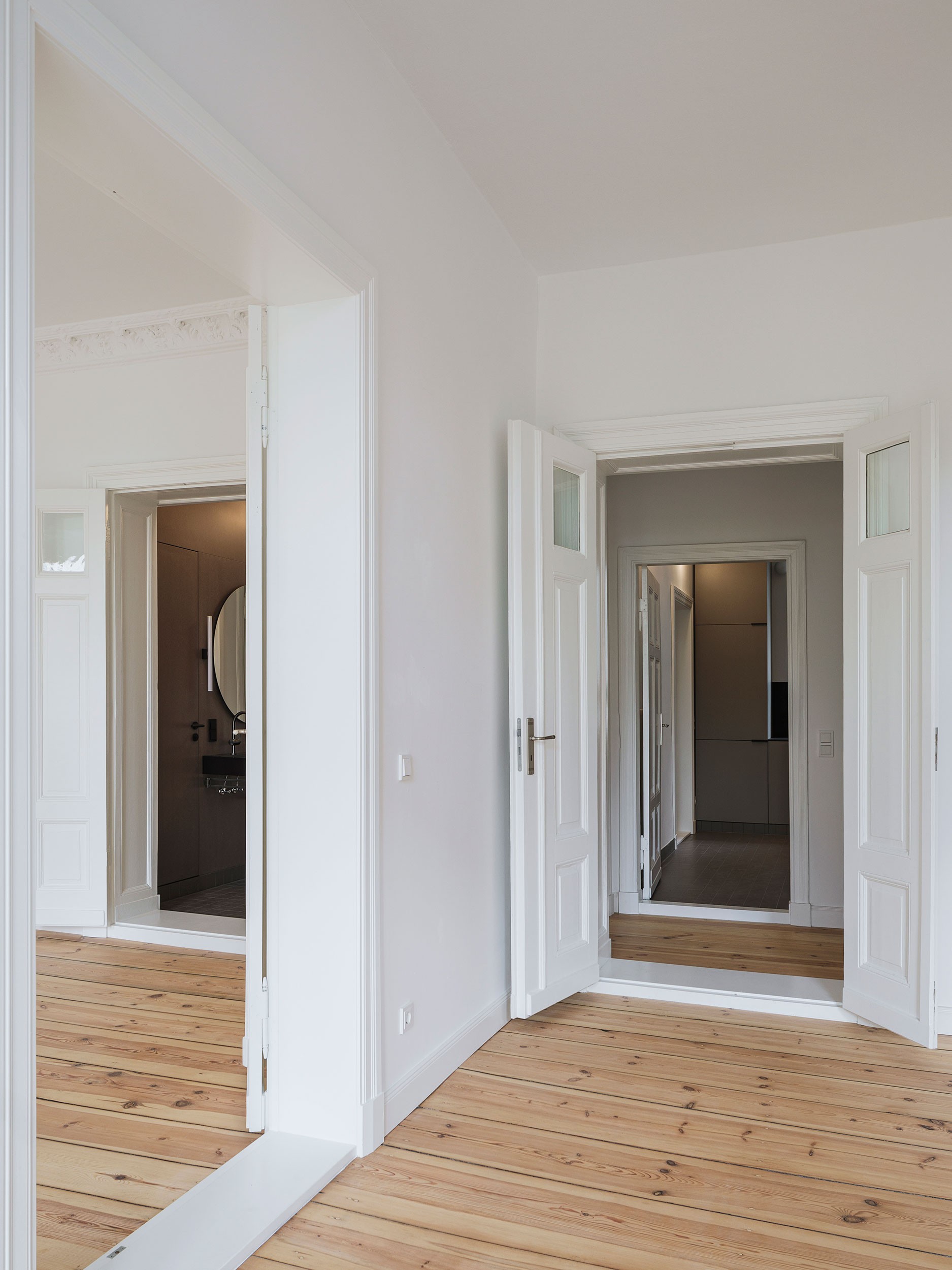 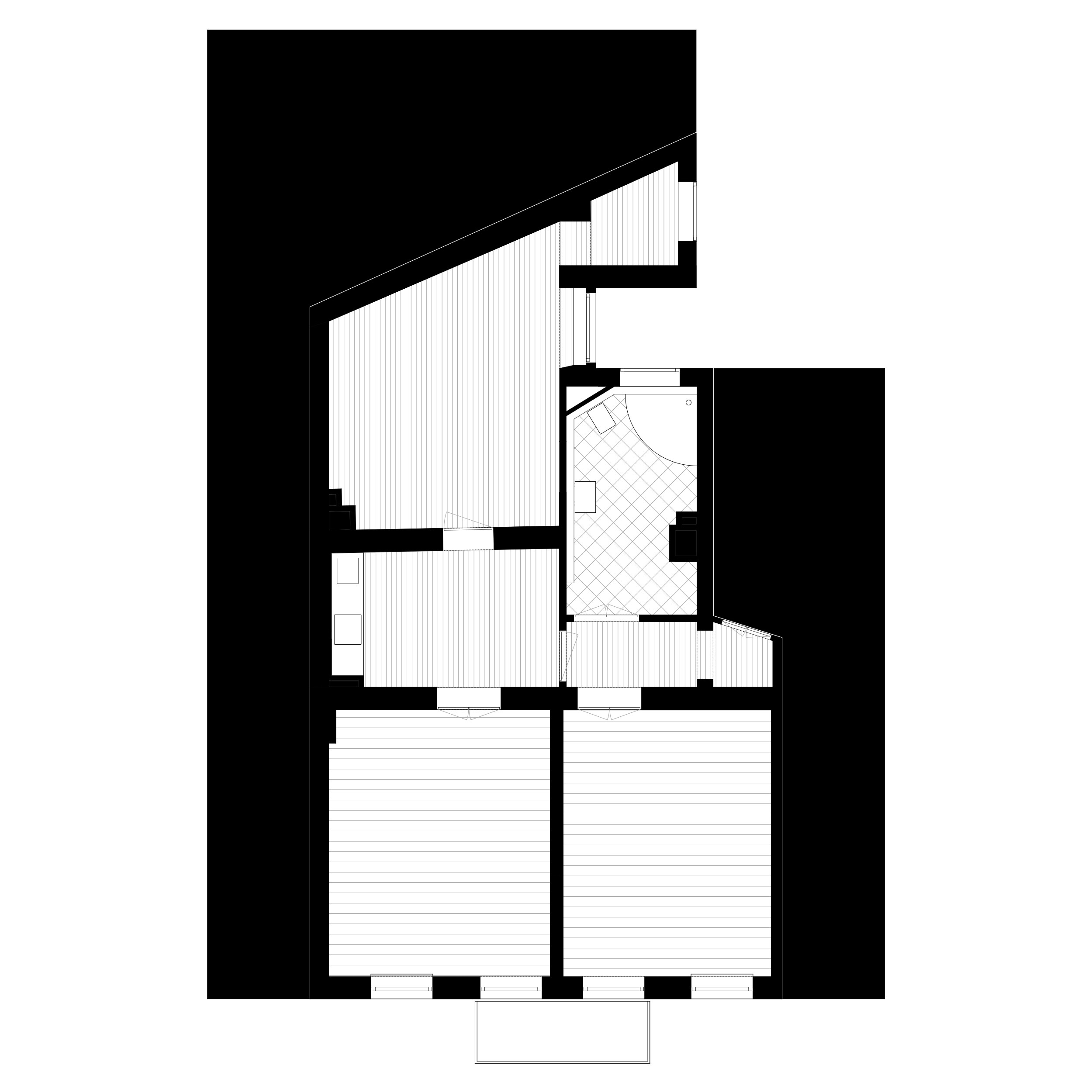 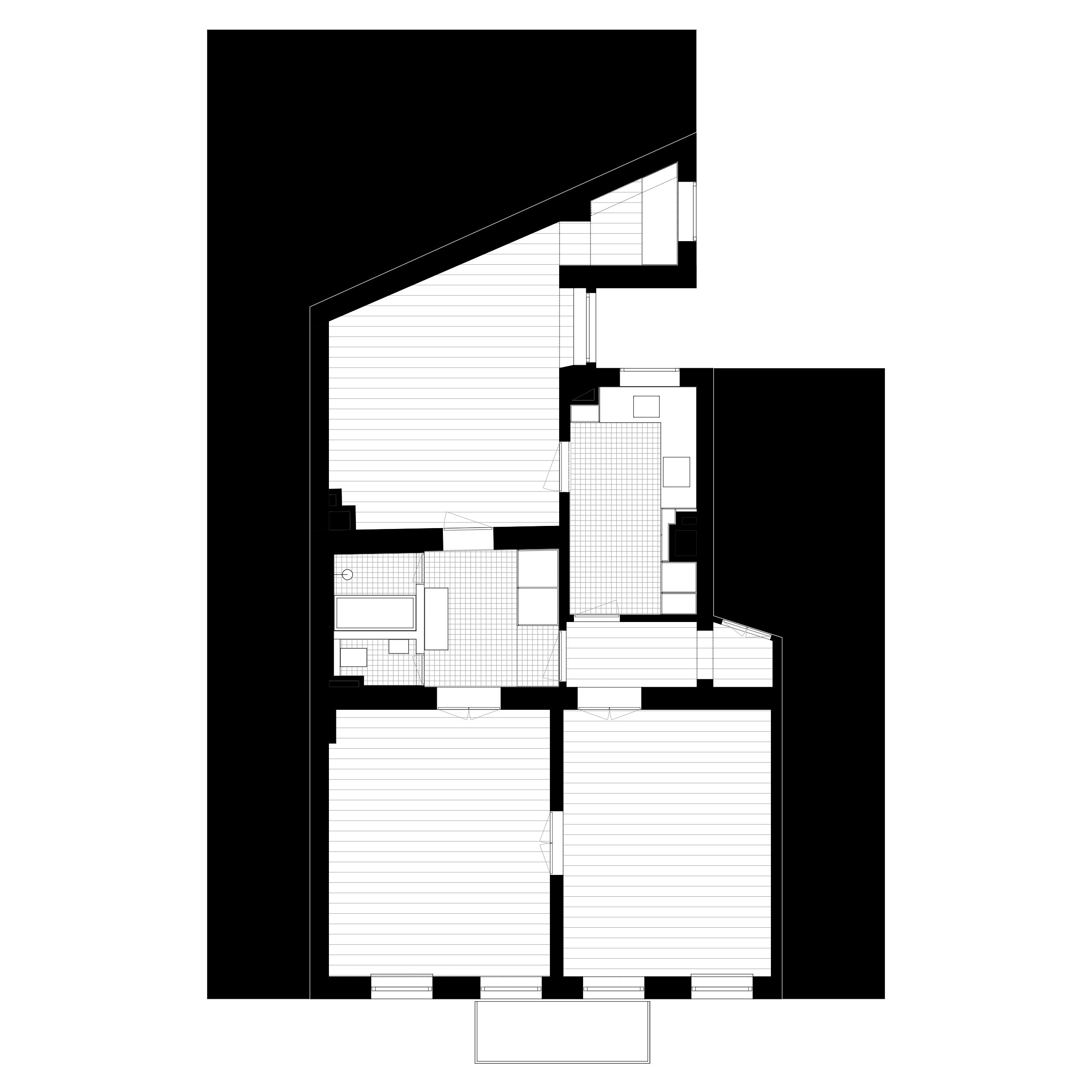 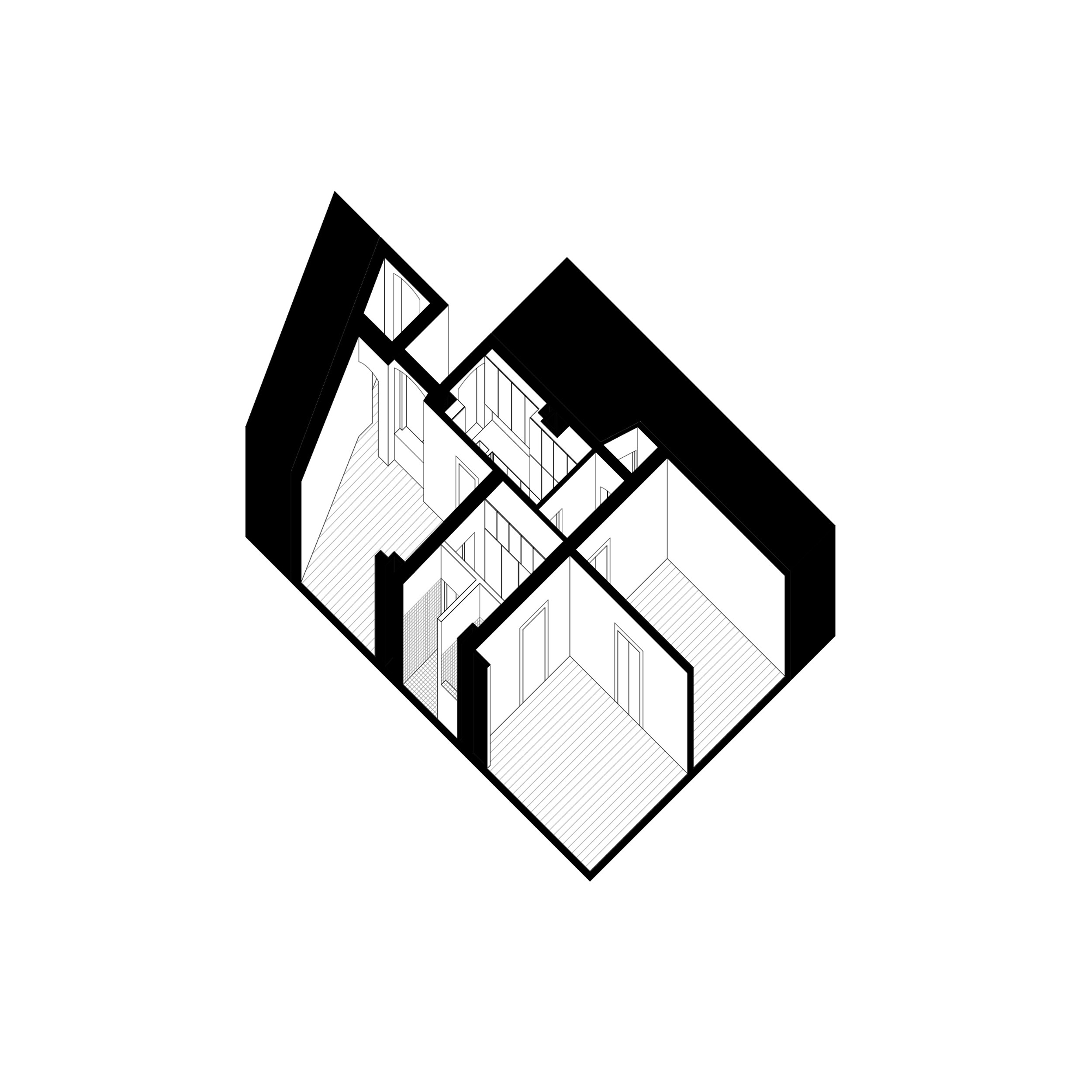 The appartment is situated in Schwedter Straße, Prenzlauerberg, on the second floor of a building constructed in 1883, with facades towards both the street and the courtyard.
The great depth of the building required a well thought out distribution of the incoming daylight.
The existing appartment presented a classical style floor plan, grouping the rooms that were orientated towards the two facades around a central hallway. The hallway was a significant feature, as it measured a width of 2.70 m instead of the usual 1,20 m and contained the windowless kitchen as well.
All other rooms orientated towards the street facade or the courtyard were used as living- or bedrooms, with the exception of an oversized bathroom which included a rounded corner bathtub in front of the window.
The client was open to unconventional solutions and all her wishes could be realized in a very detailed manner and without impairment of functionality, thanks to a flexible budget. The preservation of the generous, historical rooms and the addition of multiple lavatories was the priority.
Consequently, the exchange of the kitchen and bathroom presented itself as the best solution, as the new kitchen could benefit greatly from the courtyard orientation while the new bathroom could take advantage of the former kitchen`s position in the central hallway.
Thus, the kitchen now recveives incoming daylight, direct ventilation as well as views of the courtyard and an improved connection to the entrance and living area. The new bathroom’s central position allows access from both bedrooms and the entrance area.
All further interventions were targeted at improving the circulation within the existing structure.
The bathroom was divided into a private, closed area and an open, more undefined area which presents as a transitional space between the two bedrooms and can also be used as a utility room.
This partition allows for simultaneous use of the room by up to four people.
In the Kitchen, the built-in elements are condensed to one side in an „L“ shape, levelling with the adjacent chimney’s protruding edge. The opposite side remains available as open space.
In addition, the kitchen and bedroom facing the courtyard, as well as the living area and second bedroom facing the street were each connected through a generously dimensioned door, creating a circulatory room sequence and allowing a more versatile use of the family appartment.
The materials used emphasize the diverse character of the interventions. The rooms that were altered the most are distinguished through industrial materials such as grey ceramics as flooring and skirting, in accordance with light grey MDF for the built- in closets.
The other rooms, remaining almost unaltered with exception of the two added door openings, were given a decidedly historical appearance by reusing the old skirting, profile doors and solid oak planks as well as applying light, neutral paint on the walls.